Karen Bystedt is a tall, elegant woman, with large, seductive, saucer-shaped eyes. She wears her blond straight hair in a chic, short bob that accentuates her face and seems to help her frame the narratives she loves to relate. Bystedt is full of stories. Every photograph she takes or appears in has a tale to tell a trait, she shares with the best of photographers. Photographers are story tellers and Karen has some gems.

I first met Karen at the Artist Corner Gallery, where I curate photography and help artists make books. Karen was designing a beautiful giant box, the first of ten, to contain The Lost Warhols. The Lost Warhols? I had to ask.

It seems that Andy Warhol always wanted to be a model. Thirty years ago, when Karen Bystedt saw a Barney’s Clothes store ad that Andy posed for, she got that. Bystedt was a film student at NYU. She rang up the Factory and Andy himself picked up the phone. Warhol was excited by the young photographer’s desire to have him model. He wore his best wig to the shoot. Shortly after, Bystedt left New York. Ever on the move, the young photographer somehow lost the negatives. Though she missed them terribly, they were gone. Thirty years after Warhol mugged for her, Karen Bystedt was cleaning out a L.A. garage and found a box of old Andy Warhol contact sheets. There in the very bottom of a worn-out corrugated cardboard box were the all negatives and an audio cassette. The clever girl had taped Warhol during her shoot.

Karen’s Warhol collection comes in a boxed set of 10 twenty-four inch by twenty-four inch archival pigment prints of which five are black and white, five in color. Of note are Bystedt’s collaborations with pop artists, like Peter Tunney and Tonia Calderon. Taking her Lost Warhol prints into another contemporary realm, that of celebrity pop artists, is a move that I am sure Andy would approve of. It was a bit of a shock seeing AW in color but looking at Bystedt’s color shots became a guilty pleasure. I kept peeping into her big top-secret box. There are two other, smaller, individual print editions. A forty by forty inch went to Prince Albert of Monaco and another sold to Tomasso Buti, a wealthy jewelry designer and manufacturer who owns the original Andy Warhol Factory building in downtown Manhattan. I instantly fell in love with two amazing portraits, where Andy was shot quite handsomely, almost as a pin up.

Many of these Warhol photographs offer a rare look at the pop artmeister. The best intimately connect us to the man who usually hid behind a faux, highly effected and vacuous persona. To see Andy, father of contemporary pop, making eye contact with Bystedt’s camera, humanizes him and makes him an object of affection and desirability — just what every model hopes for.

A selection of Bystedt’s 40 x 40 inch prints headline The Robert Berman Gallery Month of Photography in L.A. (MOPLA) show, opening April 6 until April 28, 2013 at Bergamot Station. Berman is thrilled to show the Warhols. “It’s rare that a photographic body of work, that’s been hidden for so many years, suddenly surfaces and gives us a fresh look at one of the most celebrated artists of the Twentieth century. Bystedt’s photos are austere and provocative. They see past the model’s ironic gaze and show Andy at his best.”

After photographing Warhol, Bystedt moved firmly into photographing celebrity movie stars, before they became famous. She seems to have a savvy, prescient sense of being able to suss out nascent, serious actors who are hard at work getting the work. She knows which ones have the iconic good looks, the talent and the industry insiders on their team grooming their clients to become big movie stars. Then she shoots them.

Bystedt has written the narratives and interviews that accompany the four books of photographs she has published. NOT JUST ANOTHER PRETTY FACE (1983), THE NEW BREED (1988), BEFORE THEY WERE FAMOUS (1992) and THEY DARED TO DREAM (2009).

Karen does her homework and then works at getting to know the right people who can open doors for her. She is gracious, bright and is enormously skilled in the social graces of celebrity wrangling and maneuvering. She is a sensitive, generous and genuinely caring woman. But most of all she is purposeful, singularly focused on getting access to and shooting those “anointed” for stardom. She establishes an intimate trust with those she photographs, she engages them on-camera and then makes them look beautiful — a skill well honed on Andy Warhol — and one the photographer used throughout her career.

Last year, at an Amber Lounge Charity event in Monaco, where Prince Albert of Monaco bought one of her Warhols, Bystedt met Parisian couture designer Nabil Hayari, who loaned her the stunning pink gown that Bystedt wore all over Los Angeles during the Oscar week events she attended, promoting her Warhol prints. Bystedt uses glamour and publicists, two powerful levers of celebrity, to become one in her own right. 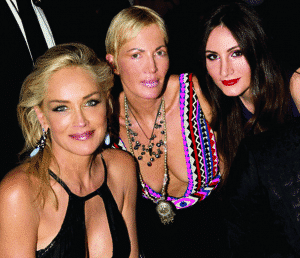 I remember seeing Andy Warhol, many years ago. He was the supreme fashionista. He loved glamour, models, beautiful men and women. Fashion comes and goes but truly individual style transcends the moment, and makes an impression in our collective unconscious that is long and lasting. Such was the brilliance in the way Bystedt photographed Andy, and such was the genius of Warhol. He iconicized the pop cultural touchstones of his times; branding them in his own unique way. Then, as the consummate impresario; he presented them to the cultural zeitgeist. The Lost Warhols make us wish he was still around.