These past January 8th and 9th, in a very Parisian atmosphere the Couture House Hayari Paris introduced its last creations in Los Angeles, as an exclusive preview for the Golden Globes 2016.

In the presence of the couture designer Nabil Hayari, many celebrities were seduced by the last lines of leather goods and unique jewellery. 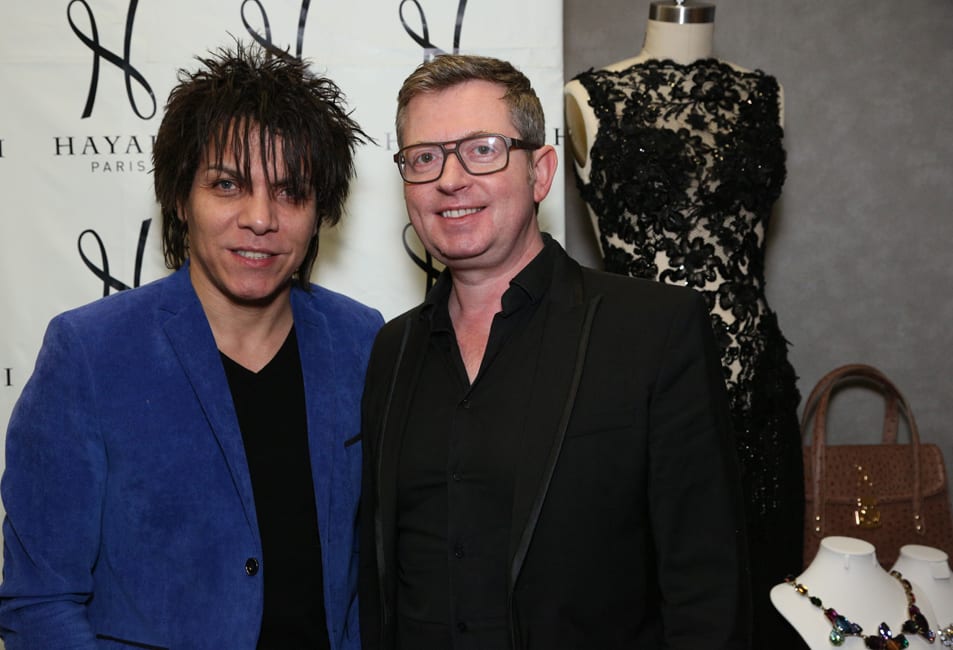 Within the W Hollywood Beverly Hills Hotel, the Couture House, famous for its unique made-to-measure evening and red carpet dresses, was noticed by the Golden Globes 2016 nominees. The collections seduced Anthony Anderson, currently filming the American TV Show “Black-ish”, who seized the mixed exclusive clutch bag FeHOM. This bag is the essential accessory for connoisseurs who cannot live without their precious computer. It appears to be the necessary element to transport the tools of fashionistas and bloggers throughout their daily activities. It was chosen and approved by Jimmy Jean-Louis, actor in the movie “JOY”, nominated for Best Motion Picture – Comedy or Musical. 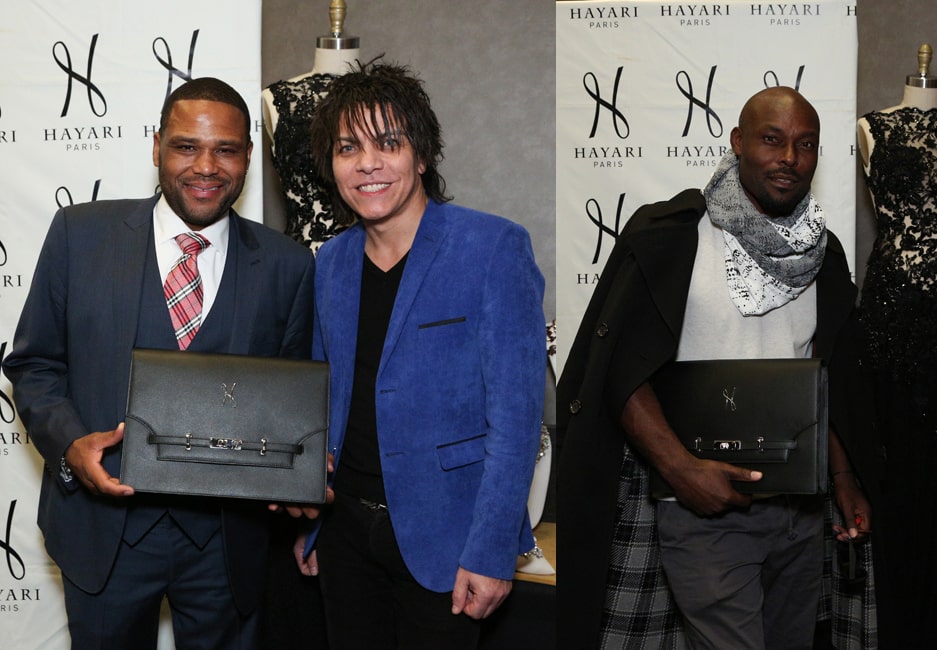 Anthony Anderson currently in the TV Show “Black-ish” and Jimmy Jean-Louis who acts as Toussaint in the movie “JOY”, here above with the clutch bag FeHOM and Nabil Hayari

The actors Johnny Ortiz and Richard Cabral who can be seen on ABS in “American Crime”, TV show nominated Best Television Limited Series or Motion Picture Made for Television at the Golden Globes, also fell for the clutch bag FeHOM.
Vincent Rodriguez III, main actor in the musical show « Crazy Ex Girlfriend » aired on CW, cracked the photograph with a wide grin, also under the spell of the leather mixed bag FeHOM by Hayari Paris.

In the end, the clutch bags were all very successful. Indeed, the pouch from the Ephemeral Collection with crocodile effect was chosen by Diana Maria Riva, actress in the new TV Show “Telenovela” aired on NBC in which she acts as Eva Longoria’s best friend, alias Mimi. 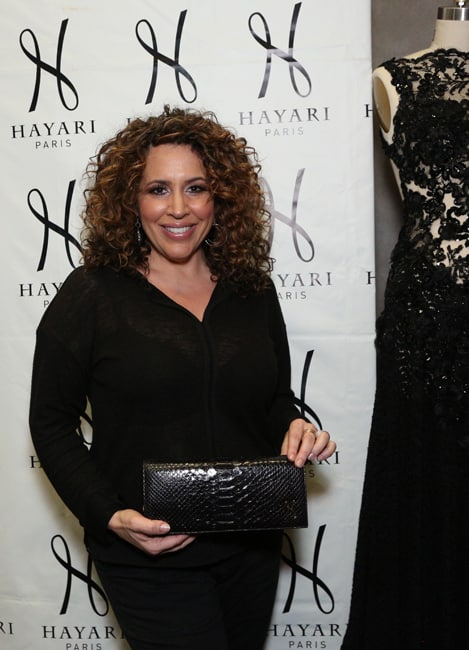 Viola Davis, nominated Best Performance by an Actress in a Television Series for her role in “How to Get Away with Murder” aired on ABC, seized the line of leather bags Alisa. The latter was very successful among actresses like Khandi Alexander from the show “Scandal” (aired on ABC) who fell for the blue one, Krista Marie Yu of “Dr Ken” (on ABC) who liked the glazed black, Scout Taylor-Compton of “Nashville” (on ABC) who opted for the blue one or Ta’Rhonda Jones of « Empire » (aired on Fox, Series Nominated Best Television Series – Drama) who chose the taupe with ostrich effect. 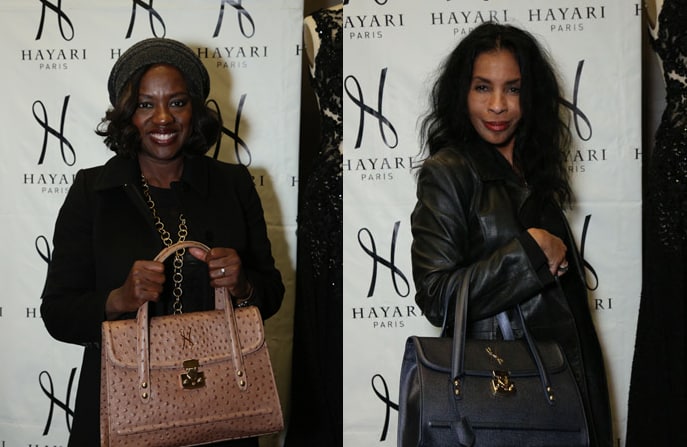 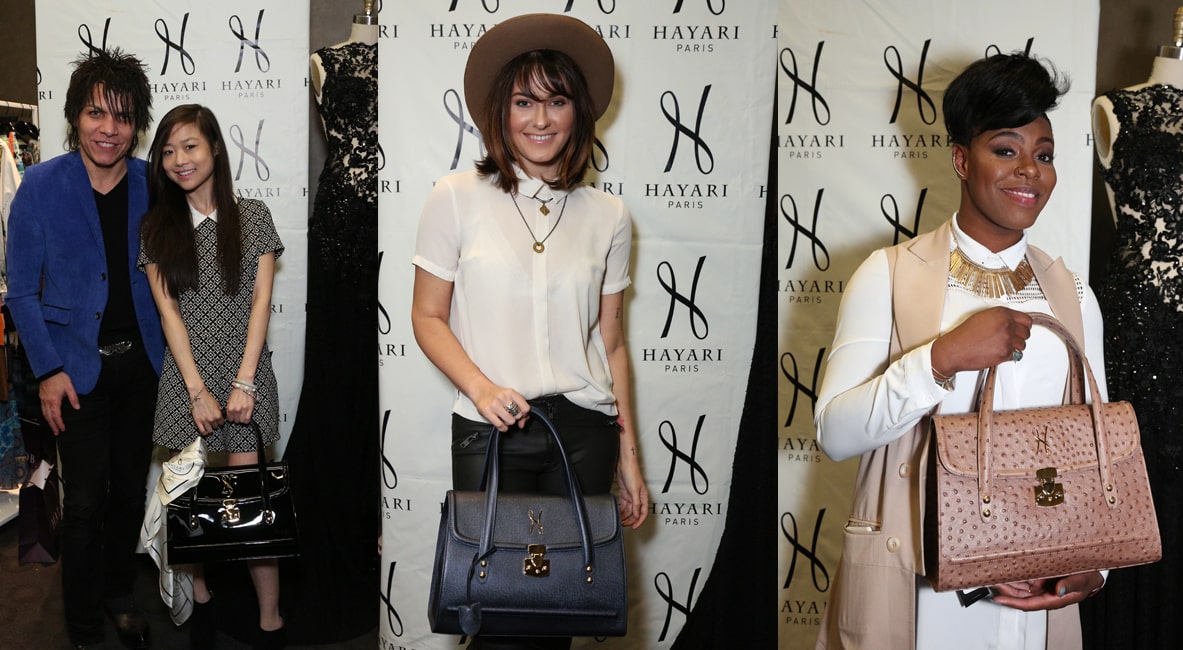 Krista Marie Yu of the TV Show « Dr Ken », Scout Taylor-Compton of « Nashville » and Ta’Rhonda Jones of « Empire » with the Alisa handbag

The Alisa handbag, a creation to pay tribute to Alisa Krylova, Nabil Hayari’s muse, was not the only one that attracted the attention of ladies. Indeed, the Charlène handbag, homage to the princess Charlène of Monaco, was chosen by Adrienne C. Moore of the TV Show “Orange is the New Black” (aired on Netflix, nominated Best Television Series – Drama), by Necar Zadegan of the TV show “Girlfriend’s Guide to Divorce” (on Bravo) and Adina Porter of “The 100” (on CW). Likewise, the Pénélope handbag created to pay tribute to Pénélope Cruz, delighted actresses Renee Olstead of “Unfriended”, Jenna Willis of “American Crime Story” (on FX) and Kiki Sukezane of “Heroes Reborn” (on NBC). 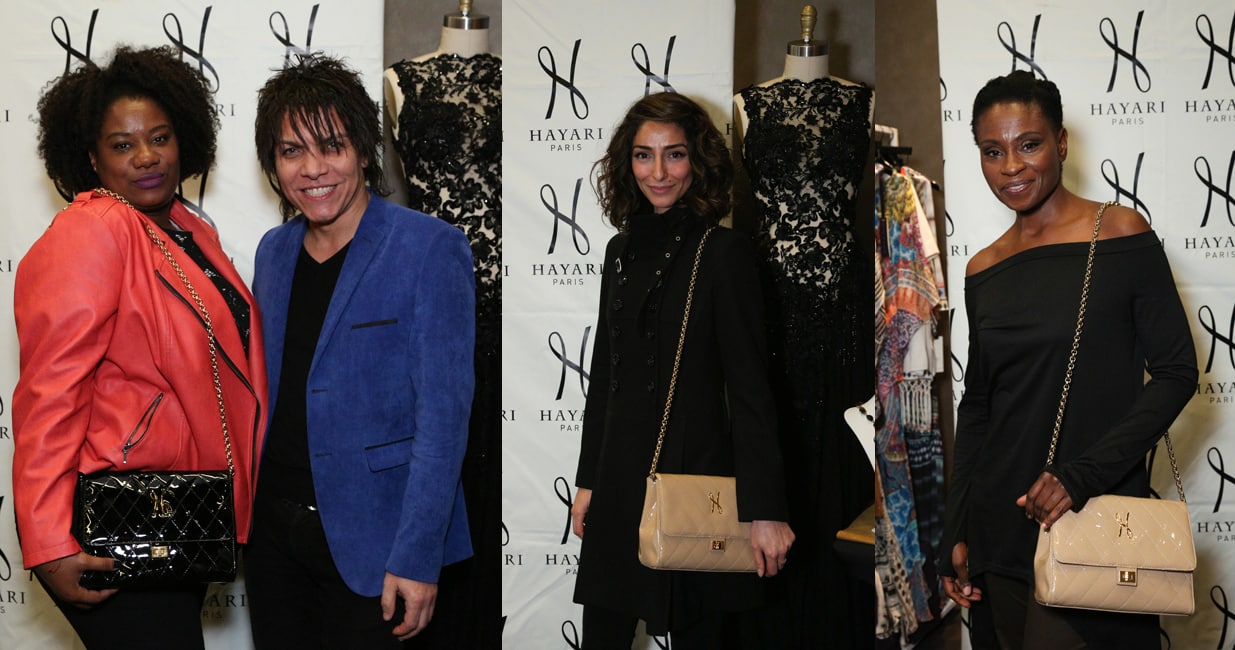 Adrianne C. Moore of the series « Orange is the New Black » with Nabil Hayari, Necar Zadegan of « Girlfriend’s Guide to Divorce » and Adina Porter of « The 100 », with the Charlène handbag

Renée Olstead of « Unfriended », Jenna Willis of « American Crime Story » and Kiki Sukezane of « Heroes Reborn » with the Pénélope handbag

Some of the guests turned to the exclusive jewellery produced in limited series by Hayari Paris, such as Rya Kihlstedt who acts in “Heroes Reborn” (aired on NBC) and who loved the vintage resin cuff with Swarovski elements. Breeda Wool of “UnREAL” (on Bravo) was won over by the Princess necklace from the new collection. Gillian Alexy who acts in “Outsiders” (on WGN) also wore a splendid black and champagne necklace. 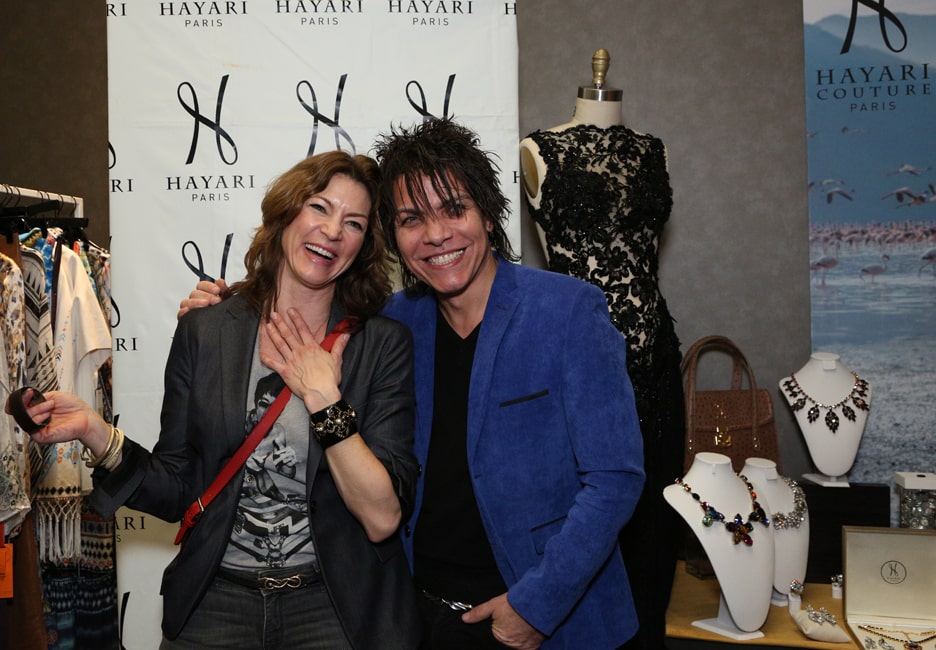 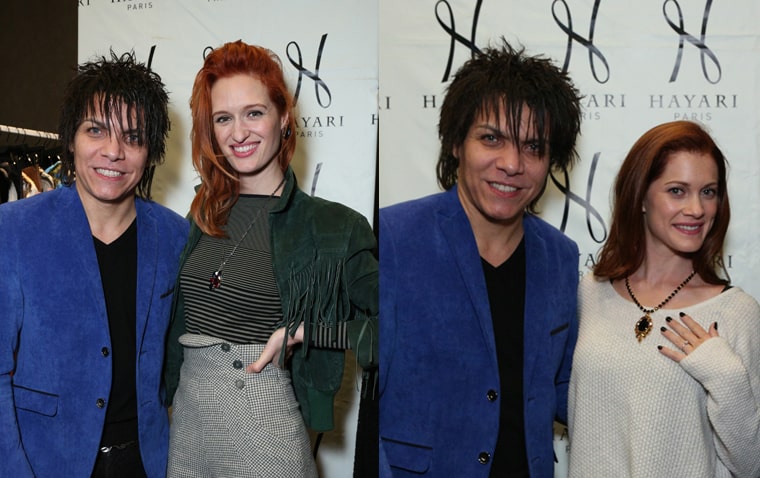 Katie Maloney with the Hayari Paris belt and Kristen Doute, of « Vanderpump Rule’s »

Let’s not forget about perfumes! Amour ELEGANT conquered Mark Ballas, professional dancer in the famous Show “Dancing with the Stars”, who recently partnered with Shannen Doherty (Prue Halliwell in the TV Show “Charmed”) and Willow Shields (Primrose Everdeen in the movie “Hunger Games”).
W. Earl Brown, actor in the TV show « American Crime » (aired on ABC), series nominated Best Television Limited Series or Motion Picture Made for Television, was also perfumed with a few drops of Only for Him by Hayari Paris. The Hayari Paris team wishes to thank Greer Grammer, Miss Golden Globes 2015, for her great interest in the brand. 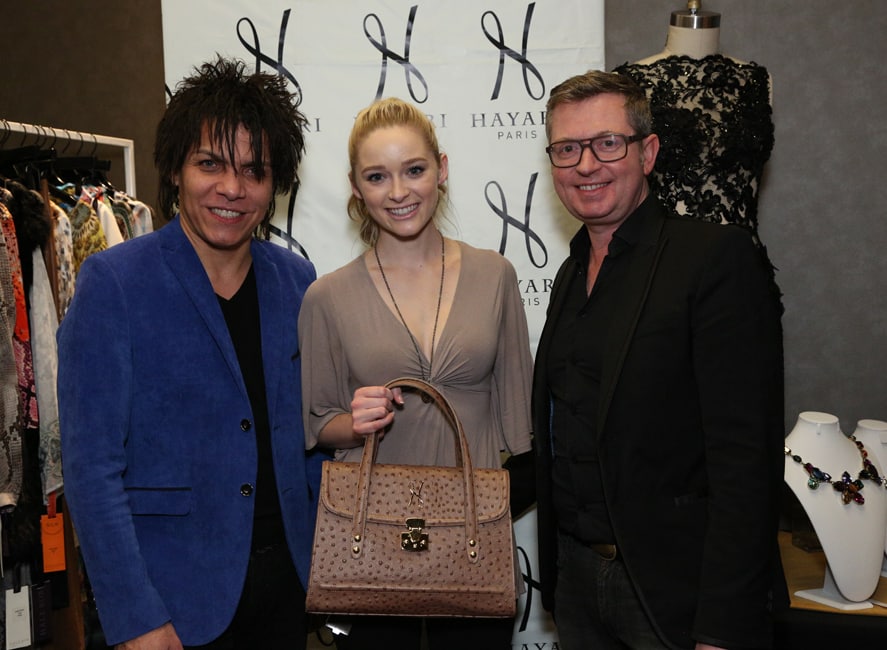 This private ephemeral showroom provided an opportunity for Hayari Paris to launch its lines of products in limited edition in the United States and Europe. They will be available starting next month in chosen stores as well as online on www.hayariparis.com