Since Creed vaulted Royal English Leather, I’ve been on the lookout for a subtle leather that didn’t really offend or project. That rules out Dior Leather Oud, Tom Ford Tuscan Leather and quite a few others. Per usual, Hednic had pointed out in another thread Hayari’s Le Paradis de l’Homme – which I initially saw over at Fragrantica – and it hit me. The notes caught my attention.

Their mens line isn’t available yet in the US, so in typical “I gotta try it” fashion, I wrote them an e-mail. Halfway didn’t expect anything from them, but within an hour, I received a response and they were willing to tempt me by sending out a sample or two. Score!

They sent both the Le Paradis de l’Homme and the Hayari Only for Him samples. I’m skipping the latter one for now, my mind was set on just the Le Paradis de l’Homme which notes include: Brazilian redwood, vetiver, oak moss, atlas cedar, papyrus, sandalwood and leather. There’s a few other notes, like white musk (I really didn’t get this one until way into the drydown period, like 7 hours later) and a rather gentleman, clean leather. Le Paradis de l’Homme is considered to be a chypre. And mind you, my nose is nowhere near as refined as a lot of you guys. I learn from your posts daily – and appreciate each and every lesson immensely.

So my take? This will replace my love for Creed Royal English Leather, easily. It’s a subtle leather, with great longevity, yet it doesn’t project like a beast, yet it isn’t exactly quiet. It’s a gentleman scent, whereas I’d consider something like Leather Oud a brute. REL comes off a bit floral upfront, almost “old woman-ish” but that gives way to a gentle leather that’s not overbearing. Between this and Dior Cuir Cannage – which I’ll be testing much more closely – I think this one comes off way more masculine, there’s wood with leather way upfront than Cuir Cannage’s floral approach. I blame Cuir Cannage’s iris notes for “un-butching” it up a bit.

I personally don’t get cedar from it, not immediately. There’s woods, but they’re almost non-descript at first. But once the top notes give way to the middle notes, sandalwood comes out that blends into cedar that gives way to white musk and (red)woods and then the leather calms down to a suede like presence.

This isn’t a strong leather. Knize fans, you’ll be disappointed. Expecting Colonia Leather? You’ll measure Le Paradis de l’Homme and will find it lacking. Cuir Tabac fans… yeah, take that expectation down like 20 notches or so. This has a lot in common with something else I’ve smelled before, but instead of florals, add wood. Instead of strong, medicinal leather, imagine smoothed out, expensive fancy leather. And in terms of projection, this is right on par with Cuir Cannage and the midnotes of REL than anything else.

Longevity wise, I can still smell it 10 hours after the fact, just wafts here and there; but it’s now a skin scent mostly. But the first 4-7 hours were going well. I’ll continue to test this one, but so far I’m impressed.

Yep. I’m a fan. Perhaps the first scent of 2014 that’s really gotten my attention and it’ll have a place in my collection.

Nabil Hayari and Hugues Alard of HAYARI Paris, along with Crafting Beauty invited media to the World Bar at the Trump World Tower to celebrate the newest fragrance additions to their range with their first venture out of the women’s fragrance market and into men’s fragrance and to support the WCPUN’s “War against Child Labor”. 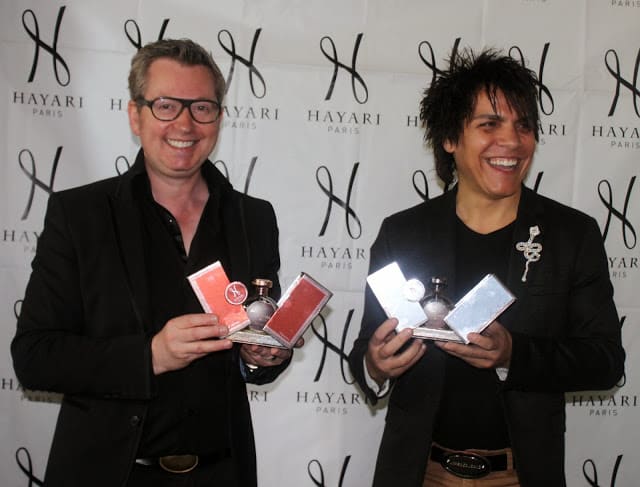 HAYARI Paris’ two new men’s fragrances – ONLY FOR HIM and Le Paradis de l’Homme were inspired   by the idea of the men whose love makes women feel beautiful. The two scents are both manly and tender at at the same time and magically convey HAYARI Paris’ couture values while respecting the codes of niche perfumery. both men’s fragrances boasts top, middle and base notes made of delicate flowers, precious woods, leather, spices, and have been constructed in the purest French Perfume tradition. Find out more about these new fragrances below: 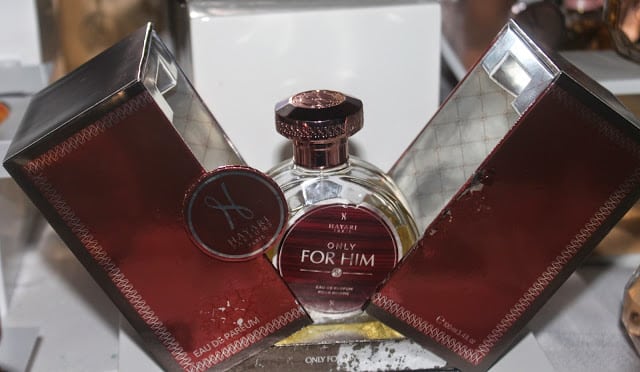 A parallel to HAYARI Paris’ first fragrance for women, ONLY FOR HER, the elegant and sensual ONLY FOR HIM fragrance features woody and smoky exhalations which captivates and transports the senses with it’s combination of the masculinity of gaïac wood and benzoin, with the warmth of black pepper and amber. It also boasts the sensuality and tenderness of the white flowers (lily of the valley and jasmine), and bergamot. 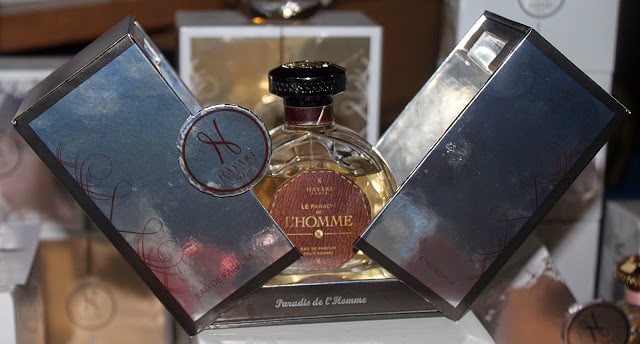 An olfactory dream and the perfect seductive diptych, Le Paradis de l’Homme’ sensual and couture leather scents redefines men’s luxury with a distinguished spirit and hints of luxe nature.  Le Paradis de l’Homme blends leather, musk and sandalwood to form contemporary, masculine, yet tender notes, while cedar wood and vetiver scents evoke the gardens of Eden and drapes one in oak moss and patchouli for more chic and chypre  (“a family of perfumes that are characterized by an accord composed of citrus top-notes, a middle centered on cistus labdanum, and a mossy-animalic base-note derived from oak moss and musks”*).

The fragrances’ 12-facets numbered bottles, assembled to couture standards and cradled in a unique blossoming case, express the harmony between the opulence of a jewel and the fragility of a flower and reflect the luxury and exclusivity of the scents.

For a list on retailers which carries ONLY FOR HIM and le Paradis de l”Homme, visit Henri Bendel, CO Bigelow, New Beauty at Fred Segal, New London Pharmacy, or www.hayariparis.com.