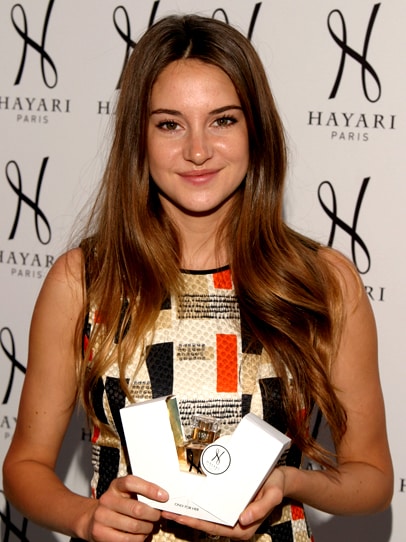 American actress, who’s career began in commercial modeling, which led to many acting roles. Her first roles included Amy Juergens in The Secret Life of the American Teenager (2008–2013) and of Felicity Merriman in the 2005 film Felicity: An American Girl Adventure (2005). Additional parts which followed include starring in The District (2000), Crossing Jordan (2001), and The OC (2003).

She is most renowned for her breakthrough role as Alexandra King in the Descendants (2011) alongside George Clooney, which led her to win an Independent Spirit Award and the 2012 MTV Movie Awards Breakthrough Performance Award, as well as a Golden Globe Nomination.
Her career has taken off this year with appearances in in mega hits like Divergent (2014), and the romantic The Fault In Our Stars (2014)- for which  she and co-star Ansel Elgort won the award for Best On-Screen Couple at the Young Hollywood Awards in July.  More recently Woodley has starred in the Trailer for the movie White Bird in a Blizzard (2014), and is set to reprise her role as Tris, alongside Theo James, for the upcoming movie Insurgent (2015) – the next installment to the Divergent (2014)  film series.